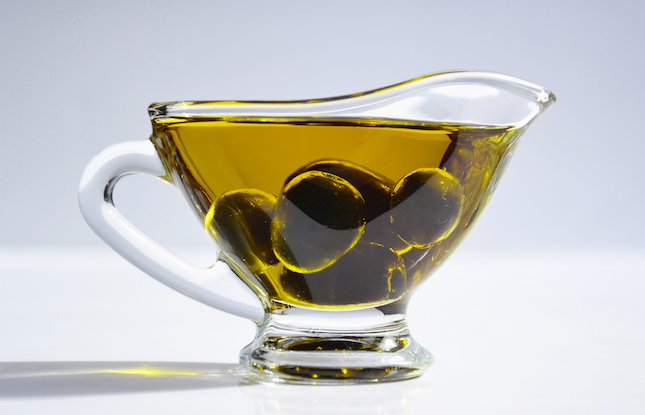 We often default to the cooking oil used in the home we grew up in, or choose one that we’ve been told is the “healthy” option and go with it to make things easy. But, there are so many oils out there, including ones better suited for all different types of cooking. Here is Elissa Goodman‘s take on which options work best for different needs.

Recently a client told me they only use extra virgin olive oil, no matter what they’re making. I asked them to clarify whether they use extra virgin olive oil for high-heat cooking as well, and they said yes – extra virgin olive oil is the only oil they use.I thought this was very interesting, but more common than you might think. We often default to the cooking oil used in the home we grew up, or choose one that we’ve been told is the “healthy” option and go with it to make things easy. But, there are so many oils out there, including ones better suited for all different types of cooking.

I started asking other clients which oils they use frequently. Some of the main oils they mentioned using as staples are absolutely terrible for health and they had no idea! It was time for me to put a list of oils together in order to highlight some of the positives and negatives of each, with the goal of guiding my readers through the oil decision making process.

EVOO is arguably the most common oil in American households. It is made by pressing olives and extracting their leftover oil. It can have a number of different flavors to it, like buttery, grassy, spicy depending on where the olives are from. EVOO has a smoke point of around 325 degrees Fahrenheit, which is relatively low in the oil world. This is why I was surprised that a lot of my clients only cook with EVOO. A lot of dishes require cooking at temperatures above EVOO’s smoke point, which means that there is a good chance the oil can start overheating – leading to killed nutrients and damaged health. I definitely recommend saving extra virgin olive oil for uses like dressings, vinaigrettes, and finishing drizzles on top of salads. EVOO is packed with antioxidants and polyphenols, which are beneficial plant chemicals, as well as good fat. EVOO is a staple in the Mediterranean diet as well as some of the world’s other healthiest populations. Cold pressed and unfiltered EVOO is ideal since it contains more of the healthful antioxidants and is not damaged from a heating process that is often used to produce other oils.

It is amazing that avocados have so many health benefits and can even be used to make a nutritious oil. The pulp around an avocado’s pit is pressed to make the delicious avocado oil. It is full of healthy fats including oleic acid and essential fatty acids. I love avocado oil because it is a superfood that can be drizzled on top of dishes or added into dressings or used for cooking. Avocado oil has a high smoke point, which means you can cook without worry. Most oils are not so flexible. I recommend swapping out your everyday cooking oil for avocado oil whenever possible.

Despite the fact that coconut oil is primarily saturated fat, it is a fantastic choice for cooking oil. It is made up of medium chain triglycerides (MCT), which, counter-intuitively, have been known to reduce cholesterol and obesity. Beware that the flavor of coconut oil is pretty strong, so if you are a not a coconut lover, you will want to skip this oil. Coconut oil can tolerate heat up to about 350 degrees Fahrenheit, so it is ideal for baking and sautéing on medium to high heat. I love to use coconut oil for baking.

I absolutely love flaxseed oil because it is high in omega-3 fatty acids and has been shown to have health benefits like reducing blood pressure. Since flaxseed oil has a low smoke point, like EVOO, it is better to use it has a drizzle or as a base for salad dressings. I know a lot of people who even like to apply it as a heavy moisturizer to their skin and hair. Another reason why I like flaxseed oil is the flavor – it has a buttery taste that is not overbearing. It blends well with any herbs or spices.

Canola oil is extracted from the rapeseed plant. This plant contains erucic acid, which has been known to cause heart damage in animal studies. Rapeseed plants have been heavily genetically modified to resist herbicides, so most canola oil is extremely genetically engineered (or GMO). On top of that, research shows that canola oil consumption has been linked to vitamin E deficiency and shortened lifespan in various animal studies. Even worse, canola oil is so heavily processed that it contains trans fats and those are one of the worst kinds of fats for the human body. They can lead to a slew of health issues including increased LDL (bad) cholesterol levels.

Many people cook with various vegetable oils regularly, but most do not realize that they are doing their bodies a significant disservice in doing so. The clear, almost tasteless oils are highly processed and refined and come in the form of safflower, corn, soybean and sunflower oil. Canola oil also falls under this category. These vegetables oils are highly inflammatory, which can lead to even more damaging effects. Many of us grew up with our parents using vegetable oils to cook almost everything, but it is time we pass on them and start opting for some of the healthier oil options mentioned here instead.

Palm oil is a vegetable oil that comes from the fruit of palm trees. It is best to avoid it because it is unhealthy and damaging to the environment, but it is difficult to do since it is in seemingly everything. In fact, palm oil is included in around 50% of packaged products at grocery stores!  Palm oil is high in saturated fat and not particularly high in any nutrients. Palm oil is also one of the main drivers of deforestation, which is a serious problem across the globe. As a result of deforestation, palm oil is also contributing to the destruction of various species – some of which are already on the endangered list like orangutans and pigmy elephants. Do your body, animals, and the planet as a whole a favor by skipping this oil.

The list of oil options is long and can seem overwhelming. Ultimately, I recommend cutting out as many refined oils as possible (except extra virgin olive oil). For cooking, you can use organic avocado oil, organic coconut oil, or even organic grass-fed ghee since they can be cooked at higher heats. Vegetable oils should be avoided as much as possible. Something to note regardless of which oil you are using is that you should always read the ingredients. A product might say it is coconut oil but, upon further investigation, you may find that it is not pure coconut oil and that it actually contains palm oil. It is important to get in the habit of reading the ingredients list for every food item you buy, since companies have a knack of sneaking things in to dupe you. Make sure you are always buying the pure, organic version of whatever oil you are using and, remember, moderation is key.